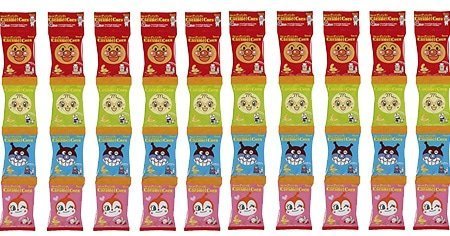 Tohato Inc. manufactures confectionary products in Japan. Its products include dessert chocolates, cookies, honey roasted nuts, vanilla ice, mango puddings, and milk chocolates. The company was founded in 1949 and is based in Tokyo, Japan. As per the transaction announced on July 3, 2006, Tohato Inc. operates as a subsidiary of Yamazaki Baking Co. Ltd.

Tohato have introduced some of Japan’s most culturally iconic snacks to the masses, with the most celebrated being Caramel Corn. Other popular Tohato products include Pokemon shaped milk snacks, Chocobi star shaped snacks, Almond caramel biscuits and Habanero spicy potato rings. Enjoy their quirky and creative snacks in the comfort of your home.

Tohato launched two new snacks brands, “Tyrant Habanero Burning Hell Hot” and “Satan Jorquia Bazooka Deadly Hot” in 2007 in an award-winning campaign which broke new ground in engagement marketing, by combining multiplayer online gaming with advertising, on a mobile phone. Customers were encouraged to join nightly battles in a virtual game, on behalf of either snack brand, to determine the winner of the “World’s Worst War”. The games ran at 4 AM. The campaign was designed by Japanese ad agency Hakuhodo and won the Yellow Pencil award at the annual D&AD advertising awards ceremony where mobile ads were recognized for the first time in May 2008.

We ship directly from Japan to your door step!