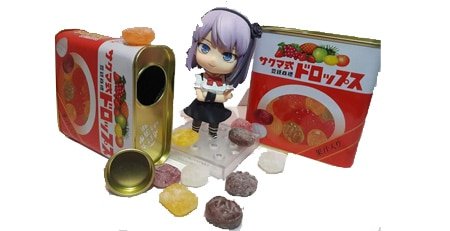 Shojiro Sakuma made his own hand-imported drops from Britain and repeatedly researched in order to put it out as the first domestically-made drops. In 1908, they completed a drop that is competitive with foreign products. The unique formula that produces fresh taste and flavour is called “Sakuma formula”, and the registered trademark of Sakuma Drops has been recognized by the Patent Office.

The Sakuma Drops Mark (trademark) is a yacht surrounded by three rhombus lines. Yachts represent trade ships, and diamond-shaped three lines represent Japan’s three major ports (Yokohama, Kobe, Nagasaki). At the time, it was a mark that showed the spirit of the founders who intend to export the drops that had been imported from abroad at the same time as exporting from three Japanese ports overseas.