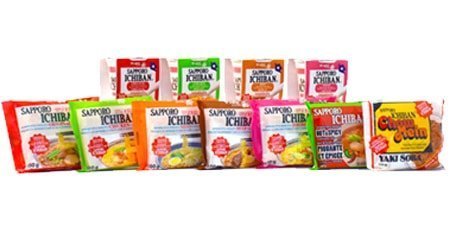 Sanyo Foods Co. Ltd. is a Japanese company founded in 1954 and re-launched with the new company name in 1981. Sanyo now is the importer, processor and distributor of smoke salmon catering products, ready meals, fishcakes and delicatessen produce by around 81 workers team.

It all Started with a bowl of ramen. The first president of Sanyo Foods, Takeshi Ida, travelled around Japan eating ramen in search of the perfect bowl. He became obsessed with a soy sauce soup in Ramen Alley in Sapporo. The original Soy Sauce Flavour Sapporo Ichiban was born out of this obsession. After finding his beloved ramen in Sapporo, Ida sampled the soup every day in order to recreate the taste. While Ida got close to creating a replica, he felt something was missing and remained unsatisfied. Finally, Ida discovered the missing taste that eventually would catapult his ramen to best-seller status. Seeing Ida visit his Ramen Alley shop almost daily in search of the missing ingredient, the sympathetic owner finally gave in and revealed the hidden element. It wasn’t the proportions or the seasoning that was off, rather there was one aromatic vegetable that would make all the difference. Once he discovered the missing link, the Original Flavour of Sapporo Ichiban was born and soon became a hit.