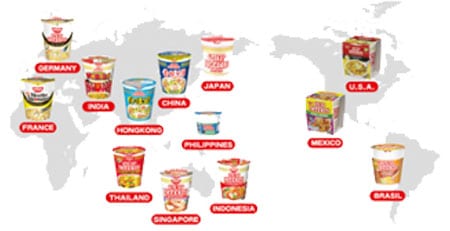 The company was established in Japan on September 4, 1948, by Momofuku Ando as Chuko Sosha. Ten years later, the company introduced the first instant ramen noodle product, Chikin Ramen. Soon thereafter, the company name was changed to Nissin Food Products Co., Ltd. The company established a US subsidiary Nissin Foods in 1970 and sold instant ramen noodle products under the name Top Ramen. Instant noodles (1958) and cup noodles (1971) were both invented by Momofuku Ando. Nissin Foods has its headquarters in Yodogawa-ku, Osaka.

Nissin Foods has established offices and factories in various countries, such as Brazil, Hong Kong, and Germany. Their products are also sold in many places around the world including Australia, the United Kingdom, the Netherlands, and the United States.