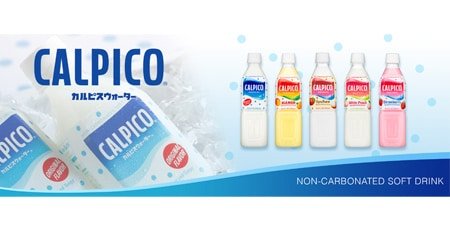 Calpis Co. is a subsidiary of Asahi and is the manufacturer of the Japanese uncarbonated soft drink, Calpis. The beverage has a light, somewhat milky, and slightly acidic flavour, similar to plain or vanilla flavoured yogurt or Yakult.

In 1904, Kaiun Mishima, the founder of CALPIS brand, visited Inner Mongolia on business. There he found people drinking cultured milk, which is made from milk fermented with lactobacilli. The drink helps the people of Mongolia maintain their health, especially those living in harsh natural environments. Kaiun was surprised by the drink’s good flavour and healthful properties. His digestion, which had been weakened by the long journey to Mongolia, was fully restored, and he discovered that both his body and mind were refreshed by the power of the cultured milk. He was convinced that the secret of the tastiness and health of the drink lay in the milk and lactobacilli. After returning to Japan, he devoted his time to developing a cultured milk product that is tasty and healthy.

The drink is sold as a concentrate which is mixed with water or sometimes milk just before consumption. A pre-diluted version known as Calpis Water, or its carbonated variety, known as Calpis Soda, are also available.

It was first marketed on 7 July 1919. It quickly became popular in pre-war Japan, as its concentrated form meant it kept well without refrigeration. The polka dot packaging used to be white dots against a blue background until the colours were inverted in 1953. It was originally themed on the Milky Way, which is in reference to the Japanese festival of Tanabata on 7 July, a traditional observation seen as the start of the summer.

The name Calpis was constructed as a portmanteau, by combining cal from calcium and pis from Sanskrit sarpiṣ, meaning butter.